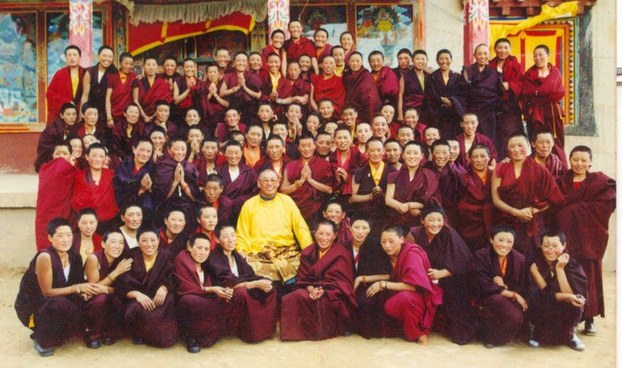 Authorities in western China’s Sichuan province have freed a senior Tibetan religious figure jailed since 2009 for resisting political reeducation campaigns at his monastery, returning him to his home in uncertain health, Tibetan sources say.

Buruna Rinpoche, the spiritual teacher of a community of nuns, was escorted secretly to his home in the Kardze (in Chinese, Ganzi) Tibetan Autonomous Prefecture on April 17 following his release, a resident of the area told RFA’s Tibetan Service.

“Buruna Rinpoche, who was detained in 2008 and sentenced to jail in 2009, was released a few days ago and has returned home,” RFA’s source said, speaking on condition of anonymity.

“In the past few years, Rinpoche’s health was reportedly very poor due to torture and a poor diet during the time that he served his sentence,” the source said.

On Dec. 23, 2009, Buruna Rinpoche was sentenced along with 54 nuns of the Buruna nunnery for protesting an official campaign of political reeducation imposed in local monasteries and for refusing to sign a document criticizing exiled spiritual leader the Dalai Lama, the source said.

“Rinpoche was also implicated in a protest by his nuns in Kardze town,” he said.

Separately, a Tibetan source living in India confirmed Buruna Rinpoche’s release, but said that he was now staying in Sichuan’s provincial capital Chengdu.

“Buruna Rinpoche, who is also known as Tulku Phurbu Tsering, was released from Mianyang Prison near Chengdu at about 7:30 p.m. on April 17,” the source said, also speaking on condition he not be named.

“I have no detained information on his present condition, but Rinpoche said that he will be in Chengdu for a few days,” he said.

“He could be planning to undergo some medical check-ups and treatment in Chengdu,” a third source, a former political prisoner now living in Australia, said.

“It is difficult for now to comment on the actual state of his health, but we know that he was told by authorities not to say anything about his trip home following his release,” the source, named Norbu Damdul, said.

Buruna was destroyed during a 1959 Tibetan uprising against Chinese rule, but was rebuilt in 1983 and expanded in 2000.  It is located on a hilltop near Kardze.

Reported by Sonam Wangdu and Lhuboom for RFA’s Tibetan Service. Translated by Karma Dorjee. Written in English by Richard Finney.