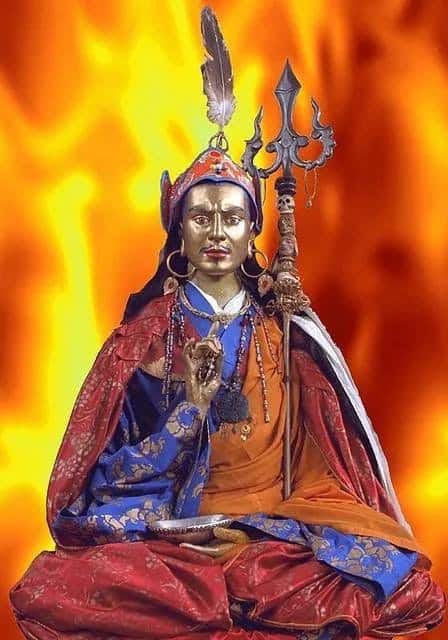 Who is Guru Rinpoche?

Guru Rinpoche or Padmasambhava (also called Padmakara and Padma Raja , Tibetan Padma -rgyal -po ‘ King of the lotus ‘ ) (Chinese :莲华 生 上 师( Liánhuāshēng Shangshi ) ; Tibetan : Pema Jungnay – Padma ‘ Byun – gnas ) , in Sanskrit means ‘ Born of the Lotus ‘ . In Tibet is known as the ‘ Precious Master ‘ Guru Rinpoche and is revered by the Nyingmapa as the second Buddha. It is considered the first and most important speaker of Buddhism in Tibet, particularly the Vajrayana and the founder of Tibetan Buddhism . His cult has spread to Bhutan and Sikkim

The life of Padmasambhava was enriched with so many legends that it is difficult to trace the historical elements from the mythological data .

He was born in the Swat valley in the eighth century . Would be born from a lotus flower in the lake Dhanakosha ( formed by the tears of his father) as a child of eight years already . Adopted and raised by King Indrabhuti dell’Uḍḍiyana he left the palace to indulge in Vajrayana Buddhism and became monaco . Come into the kingdom of Saor married , despite being monaco , Princess Mandarava , the prime of his yogini ( all had five wives , two Nepalese and two Tibetan ) .